Today is Russian Cosmonaut Day, celebrating the anniversary of the first time a man was ever put into space on April 12th,  1961. Thus, today is the perfect day to bust out your Evil Cosmonauts and play a Spirit team! 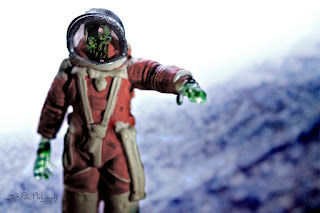 If you can only pick 1 version, the Veteran is definitely the way to go. The higher attack value and extra click of 3 damage compared to the experienced version really put it over the edge from "decent" to "useful". The rookie isn't great, since it can't even put a dent in Invulnerable foes without a critical hit. It is 10 points cheaper if that's what's important to you, but there are faster and stronger pieces for 35 points. 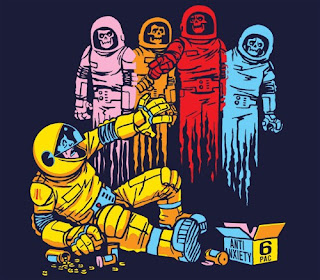 All 3 stages together add up to a total of 120 points, which leaves you 80 points to add support to really bring out the best in your crowd of comrades. Keeping to the Spirit theme, Executed Convict E provides a bit of beef with a click of Invulnerable and a high attack and damage. If you feel lucky, Frothweiler V could possibly be a better choice here, with the same attack values but higher speed and more clicks of 3 damage, but it lacks the Assassin power that may increase your total damage output depending on who you're facing. But let's be real here. The true star of the show when it comes to ghosts is the Asylum Spirit, whose Experienced form brings Possession to the table, allowing you to not only take control of many enemies and use them to do your bidding, but then leave them with 2 action tokens and an unpreventable click of damage.